The State of Illinois officially legalizes recreational marijuana after the Illinois Senate and House passed a comprehensive cannabis bill.  Governor J. B. Pritzker signed the bill into law on June 25, 2019, fulfilling a substantial campaign promise. Illinois is the first and only state to legalize cannabis through the legislative process, instead of a ballot initiative.

Although the bill faced plenty of opposition, supporters of the bill were quick to make key compromises that ensured the bill’s passage before the end of the legislative session. For example, Senate amendments removed the home-grow provision for purely recreational users while keeping such allowances for medicinal users. They also drastically scaled-back the planned expungement of criminal records. Instead of  the blanket annulment of minor marijuana-related violations, the law sends eligible cases (involving less than 30 grams of marijuana, unless the conviction is linked to a violent crime) through the governor’s clemency process. For cases involving amounts between 30 and 500 grams, individuals must petition a court to vacate a conviction. In all, approximately 770,000 cannabis-related cases are eligible for expungement. 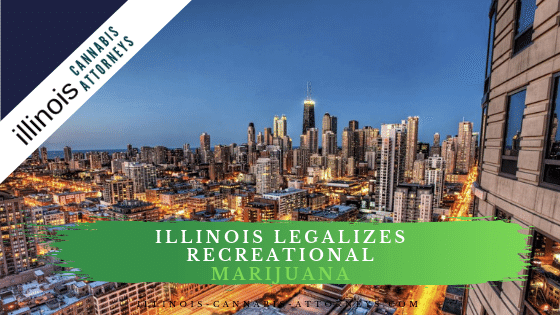 Notably, the social equity provisions of the bill remained largely untouched, making Illinois’s recreational cannabis law the first of its kind. Illinois is the first state to address fairness in its cannabis legalization by introducing a category of “social equity applicants,” who see reduced or eliminated fees and bonus application points. To qualify as a social equity applicant, 51% of the business must be owned by people who have either been arrested and convicted of a cannabis-related offense or have strong ties to a community that has been disproportionately impacted by both poverty and cannabis drug law enforcement. Businesses with 10 or more employees will also qualify if 51% of the workers fit this definition.

Legalization is expected to boost revenue for the state, with all tax revenue destined for a Cannabis Regulation Fund, which will be responsible for the administration and regulation of the new law.  All remaining revenue will be diverted to the state budget – specifically, the General, Criminal Justice, Human Services, Budget Stabilization, Local Government, and Drug Treatment funds. The Department of Agriculture also plans to coordinate with the Illinois Community Colleges to offer programs that with certify students for careers in cannabis. Up to eight community colleges will be selected for the Department’s program.

The legalization of adult-use marijuana has no effect on the current Compassionate Use Medical Cannabis Program.  Currently operating cultivators and dispensaries must continue to reserve a sufficient supply to ensure that patient access to marijuana is not interrupted. Similarly, the new law has no effect on current workplace policies that require employees to be drug free, so long as the policy is not applied in a discriminatory manner.

Mr. Roberts is the founder and managing member of Scott Roberts Law, a Detroit-based Cannabis Business Law Firm founded in 2014. Scott has spent his entire career representing businesses and helping them comply with municipal, state and local regulations, as well as assisting on transactional corporate and real estate matters. Scott is an accomplished attorney, author and public speaker, having spoke at CannaCon, Cannabis Industrial Marketplace, CannabisAid, and 420 Canna Expo, to name a few. He has also taught Continuing Legal Education on Marijuana business matters, meaning other attorneys see him speak to learn about the nuances of cannabis business law.

Missed Wave 1? How to Still Get Into the Illinois Adult Use Cannabis Market

Get directions on the map →

Complete our online form and we will contact you.